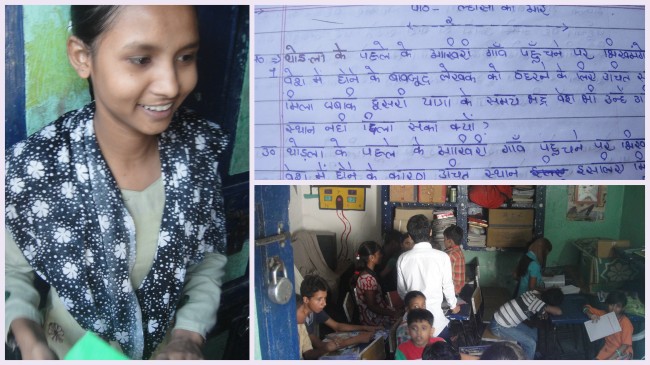 Today While visiting the slums In KathPutli Colony, Shaadi Pur for our Jaadui Pitara, We
(me and Shashank Aggarwal) happened to stop at the Gujarati School to talk to Children. In the Process… Achank my Nazar got attracted to the Register(Note Book) of the Girl in picture.
Her Entire Register was full and Each Word was like a Pearl.Itni Acchi Handwriting!!!!!

Just goes on to Prove that Good Virtues do not depend on Good Environment, Money, Resources…. But on the Human being Him/Herself!!!

PS: My Handwriting is such that If I write Now….. Then after an Hour it will be even tough for me to read what I have Written
#HighlyInspired

The Complete Page of Register.

The Gujarati School… Where 35 student were studying!!

“Kuch Chehre Aise bhi………..” is a Series by me which Portrays and Salutes People who cross my way and Inspire me to keep Going. People who do not Blame Situations, But Make the Most out of it.
People who Create Solutions rather than problems.
People who believe in themselves and make others do the same. People who are Twinkling Stars and bring Cheer to even on Moonless Nights!

The Gift of Insult.

This is one mail that I recieved in 2004 from a person whom I respect a lot.
Arun Arora. The lesson in the mail has helped me to always ignore the Bad and hug the Good. Stumbled on this while going through my archives. I think, You will like it.

The Gift of Insults

There once lived a great warrior. Though quite old, he still was able to
defeat any challenger. His reputation extended far and wide throughout the
land and many students gathered to study under him.

One day an infamous young warrior arrived at the village. He was determined
to be the first man to defeat the great master. Along with his strength, he
had an uncanny ability to spot and exploit any weakness in an opponent. He
would wait for his opponent to make the first move, thus revealing a
weakness, and then would strike with merciless force and lightning speed. No
one had ever lasted with him in a match beyond the first move.

Much against the advice of his concerned students, the old master gladly
accepted the young warrior’s challenge. As the two squared off for battle,
the young warrior began to hurl insults at the old master. He threw dirt and
spit in his face. For hours he verbally assaulted him with every curse and
insult known to mankind. But the old warrior merely stood there motionless
and calm. Finally, the young warrior exhausted himself. Knowing he was
defeated, he left feeling shamed.

Somewhat disappointed that he did not fight the insolent youth, the students
gathered around the old master and questioned him. “How could you endure
such an indignity? How did you drive him away?”

“If someone comes to give you a gift and you do not receive it,” the master
replied, “to whom does the gift belong?”